Join me in again welcoming Jonathan Gillespie to the Joys Of Apex — today, we get to hear about the many exciting updates to Nebula Logger. Thank you, Jonathan, for contributing another great post!

It’s been about 8 months since I wrote my first guest blog post for Joys of Apex covering Nebula Logger. Since that time, so much has changed:

Let’s dive more into the highlights of what’s new with Nebula Logger!

For years, most of Nebula Logger’s documentation has been maintained in the README file. As Nebula Logger has become more popular, there have also been more questions around how it works overall, how specific features have been implemented, and general questions about the project. Maintaining everything in README has become a bit unmanageable — to help improve the project’s documentation, several changes have been put into place:

2. Development Focus Has Shifted To The Unlocked Package

The unlocked package will continue to receive updates “right away” — as soon as a pull request is merged in GitHub, a corresponding release is published for the unlocked package. For the managed package, it now follows a release cycle that mimics Salesforce’s own release cycle — there are 3 releases planned for (calendar year) 2022. Each release is being tracked in GitHub, using Milestones:

I’m planning to follow this release cycle at least until the end of 2022 — I’ve been considering deprecating the managed package, and only supporting the unlocked package going forward (starting in 2023). If you have thoughts/concerns around this idea, let me know!

One of the oldest (and one of my own favorite) features of Nebula Logger is being able to tag LogEntry__c records. Originally released in v0.9.0-beta, the tagging system has historically used the standard objects Topic and TopicAssignment for dynamically labeling each LogEntry__c. This has worked well overall — but using Salesforce Topics does have some limitations:

To overcome some of these limitations, and to add some new tagging functionality, v4.6.0 introduced new custom objects to provide a better tagging system out of the box:

These new custom objects are now used as the default tagging system — for orgs using the unlocked package, you can still revert to using Salesforce Topics if you prefer, using the custom metadata type LoggerParameter__mdt.UseTopicsForTags.

In addition, this release also included a new custom metadata type called LogEntryTagRule__mdt — this allows you to define rules that automatically append additional tags to any LogEntry__c records that meet criteria that you specify.

To add Nebula Logger to your own lightning web component, first embed logger into your component’s markup:

From your component’s controller, you can then call logger using syntax similar to Logger in Apex:

Similarly, you can use logger for logging within your aura component by first adding it to the markup:

And then have your aura component’s controller or helper JS files add log entries & save the log:

Since it was first released on GitHub, Nebula Logger has leveraged platform events to ensure that logs are saved, even if an exception occurs (see my original Joys of Apex blog post for more details on why platform events are critical to making this work). But despite their importance to the overall architecture, they were previously only used as a mechanism for creating Log__c and LogEntry__c records — the LogEntryEvent__e platform events were never surfaced directly within Nebula Logger. If you previously wanted to monitor the platform events, you would had to have used an external tool like Workbench (yuck) to view the events.

In v4.6.8, a new component/tab called the “Log Entry Event Stream” was added to the Logger Console app. The new lightning web component logEntryEventStream gives you the ability to monitor & filter LogEntryEvent__e platform events in real-time. This provides a much better way to monitor your logs when trying to deal with real-time issues & support. Currently, it supports filtering on several LogEntryEvent__e fields:

Several enhancements are being planned for this feature via issue #212 — add a comment if you have any feedback for other possible enhancements. 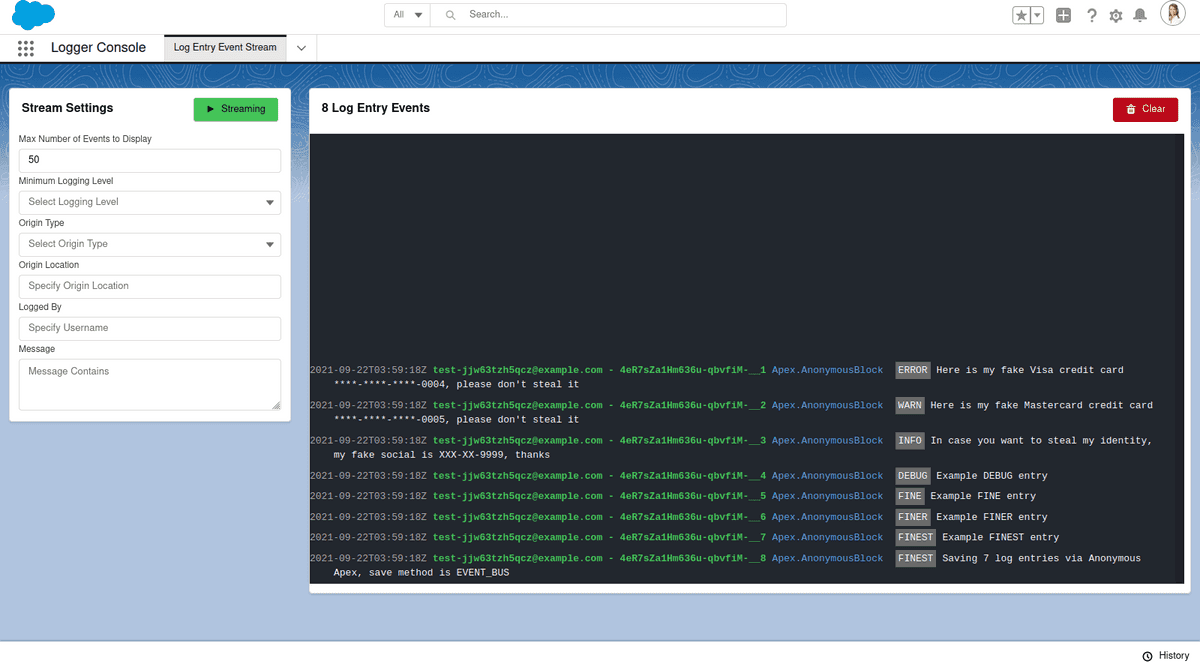 (Side note from James — this component has been one of my favorite of the new Nebula Logger additions. It’s really amazing in an org with a lot of logging setup to watch the events as they’re created!)

One of the newest features of Nebula Logger, this idea came from @fentes and @jverelst and was partially introduced in v4.6.10, with additional functionality added in v4.6.12. With the context that there is 1 Log__c record per transaction, the new “log scenario” feature provides 3 pieces of functionality:

Generally speaking, logging tools should try to log as much data as possible so that the data can be used for troubleshooting & monitoring. However, there is some data — such as social security numbers, credit card numbers, and so on — that is highly sensitive data, and you may not want to store it within Nebula Logger. To help manage this type of sensitive data, v4.6.7 introduced the new custom metadata type LogEntryDataMaskRule__mdt. This custom metadata type uses regex—based rules to automatically mask sensitive data in the Message__c and RecordJson__c fields.

If you want to add your own automation to Nebula Logger, you can leverage Apex or Flow to define your own “plugins” — the logger system will then automatically run the plugins after each trigger event (BEFORE_INSERT, BEFORE_UPDATE, AFTER_INSERT, AFTER_UPDATE, and so on) for every custom object (Log__c, LogEntry__c, LogEntryTag__c, and LoggerTag__c objects). This framework makes it easy to build your own plugins, or deploy/install others’ prebuilt packages, without having to modify the logging system directly.

Note: the plugin framework is currently in beta — there are a few upcoming changes planned to the plugin framework, which will involve some changes to how existing plugins work. The plan is for plugin framework to be stabilized by either December 2021 or January 2022. There are several official plugins being developed — I’m planning to release these plugins over the next few months.

Hopefully you’ve found some Nebula Logger’s new features to be helpful! Thanks again for everyone who has contributed to Nebula Logger over the last 8 months — everything from submitting code changes, helping with documentation, testing new beta features, and sharing thoughts on new features to add. Thanks again to James Simone for the opportunity to publish on the Joys of Apex!

Notes from James: make sure you don’t miss out on A Year In Open Source, which has some fun tidbits from Jonathan and myself on the past year in open source for Salesforce (and, in particular, how much Nebula Logger has grown in usage over the past 12 months)!

In the past three years, hundreds of thousands of you have come to read & enjoy the Joys Of Apex. Over that time period, I've remained staunchly opposed to advertising on the site, but I've made a Patreon account in the event that you'd like to show your support there. Know that the content here will always remain free. Thanks again for reading — see you next time!